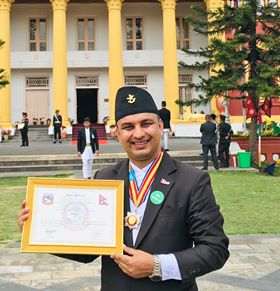 We are very pleased to share that our UKNFS in Nepal Coordinator & Board of Directors Member, Ganesh Panday ji* has received the “Prabal Jana Sewa Shree” prestigious national award from the Government of Nepal. The award & medal decoration was presented to Mr Panday by the President of Nepal on the 14th April – the First Day of Nepali New Year 2076, and announced on the occasion of Constitution Day.  Ganesh has received the award for his outstanding documentaries and media sector work for the nation & people of Nepal. 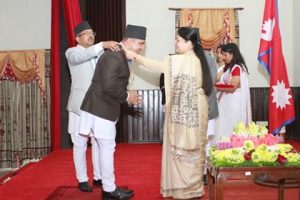 I personally and on behalf of the Board and group of Advisors at the UKNFS wish to congratulate Ganesh ji on this magnificent accomplishment which gives highest level recognition in Nepal for his exceptional documentary film and news media work. Ganesh’s work has been over recent years been rightly recognised in many nations across the globe, with international awards and lecture tours (UKNFS supportive facilitation of the showing in 2017 in the Palace of Westminster on the second anniversary of the disastrous major earthquake in Nepal on 25th April 2015, of his famous documentary film on the resilience and courage of the people of Nepal in the face of this natural catastrophe, enabled Ganesh and the UKNFS to connect). The Prabal Jana Sewa Shree Award bestowed on Mr Panday is deeply appreciated at the UKNFS, for it exemplifies Nepal’s recognition of talented figures such as Mr Ganesh, whose work in the field of film documentary and news media is so important for the whole nation because of the values of objectivity, respect for fairness, justness and humanity at its heart!

One of a number of news links on award news: http://www.sajhapana.com/news/5430/?fbclid=IwAR1PLfoO8ldBDSCAX73p548g8QBqTXAKb_Ge6GFAV7inAur7Fgjf6zvn7uo