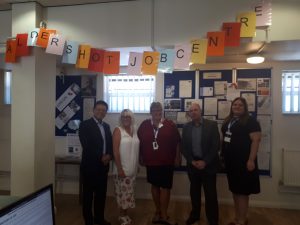 A final call had been made to the remaining few national/regional/local organisations & agencies that had been contacted to involve in the project (involvement meaning completing a questionnaire), but despite follow-ups from our Nepali community side, had not until that time involved or acknowledged the contacts that had been made for project involvement.  A number kindly contacted back (including Hampshire Futures [Hampshire Adult Learning), amongst which were, of particular importance, regional DWP and also national-level DWP.

The UKNFS would like to thank Karen Taylor (District Operations Manager Wiltshire, Swindon and North Hampshire) and her colleagues, Jill, Hazel, and Dorothy for the seriousness and quality of their enthusiastic readiness to engage in meaningful/credible ways directly with the UK Nepali community in their area-location of operation, at both community and policy and strategy development levels, through this meeting with Major Ghale and Mr Alan Mercel-Sanca.

In the UK Nepali community a period of further discussion & consultation is now going on in regard to certain topics and related actions resulting from the meeting on 2nd August, and Major Ghale is arranging for the DWP key officers an opportunity in late September to provide a presentation to key local Rushmoor area and national UK Nepali community leads and respected figures. The UKNFS will now be working in conjunction with the community on particular aspects of the topics discussed last Thursday, such as complex needs, etc. so that the UK  Nepali community can influence policy implementation change at the highest levels

More details to follow soon, including on the UK Nepali community leads UKNFS facilitated engagement with the Census, Office of the National Statistician that Major Ghale is also kindly enabling in Aldershot for the 22nd August.