The UKNFS is very pleased to announce the joint Embassy of Nepal & UKNFS, Nepal Development Conference of 26th April, which will take place at the Embassy of Nepal, Kensington Gardens, London. This conference kindly proposed — in recognition of the importance of UKNFS successful work across bilateral trade and also Nepali community support — by H.E. the Ambassador of Nepal to the UK and the Republic of Ireland (UKNFS Official Patron), Dr Durga Bahadur Subedi, is greatly appreciated by the UKNFS.

The conference will detail the UKNFS’ work that has developed a new model UK – Nepal trade/business that is focused on the Government of Nepal’s objective of Developed Nation Status for Nepal being realised by 2032 and British businesses involved in this in regard to Nepal’s energy/hydro potential development (a UKNFS enabled Anglo-American-Nepali consortium), agriculture & related, specific areas of Nepal Tourism development & outreach in the UK, Eire, USA and broader English-speaking world, and other sectors of the economy of Nepal.

Regarding the latter, the conference will also cover Nepal tourism development, and conclude on UKNFS work for/with our UK Nepali community (including the Census, and other important initiatives, including the UK Nepali cultural heritage initiative being facilitated by the UKNFS, and UKNFS support to our UK Gurkha community on duration of family leave in regard to Department of Work & Pensions [DWP] recent changes).

The conference Chief guest speaker is the Lord Mayor of the City of London, and in addition an important presentation & announcement by the Head of the National League System of England FA (Mr Laurence Jones) regarding UKNFS led work on enabling a long sought ‘friendly international’ football match between Nepal’s national Team and the England National C Team will also be provided. Beyond this historic announcement, the main programme of the conference will major on UKNFS work on trade/business, and on community supportive presentations and announcements to support Nepal’s government goal of achieving or being on the threshold of Developed Nation status by 2032.

We are delighted to provide three images below from the conference, that H.E. Dr Subedi considered as marking a new stage as indicating the level to which Nepal – UK trade & business can develop — in his summing up statement at the conference conclusion on both the Guest Presenters/Speakers, and the UK Nepali business and community organisation leads attending noted ‘All here are Friends of Nepal and of British – Nepali friendship!’ 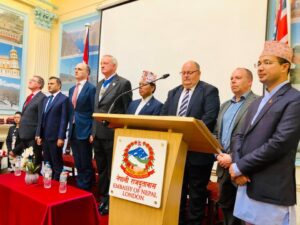 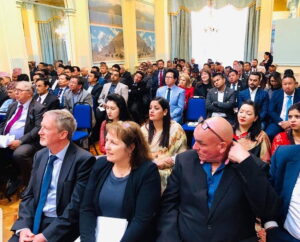 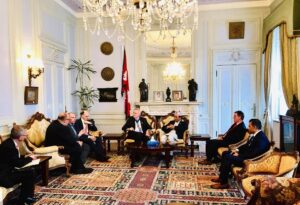