On April 15th the Nepal Art Council (NAC) – UKNFS Nepal-UK Bicentenary Exhibition was launched at the NAC Building in Nepal attended by the Foreign Affairs Minsister, British Ambassador and other dignitaries.  The UKNFS was the lead/anchor UK side main partner with NAC, as we secured the core dimension of the project through UKNFS CEO Alan Mercel-Sanca’s diligent work over a one year period to enable the participation of some ten key British museums and institutes providing access to their archives and collections at Alan’s request on behalf of the NAC. It was the Vice President of the NAC Mr Sagar Rana who in 2015 at the NAC building at a visit by Alan and UKNFS Arts section officer Deepak Tamrakar, sought from the UKNFS CEO direct support on the exhibition that was until then staying at a worthy dream level through wont of support from other directions.

The exhibition launch was a major news feature across Nepal and internationally due to the quality of exhibition and the importance of its topic, as covered in Ekantipur: http://epaper.ekantipur.com/kantipur/2017-04-16/10 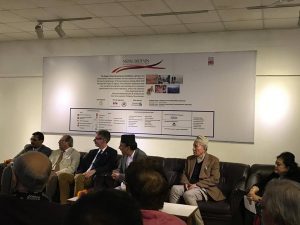 The UKNFS provided this quote in support of the launch:

‘The UK Nepal Friendship Society (UKNFS: www.uknfs.org), whose official patron is His Excellency, Dr Durga Bahadur Subedi, Ambassador of Nepal to the UK, is delighted that the exhibition, a major collaborative initiative with the Nepal Art Council and Nepal-Britain Society, that involved almost 2 years hard but very successful work, has now launched.

The initiative, fascinating in breadth and quality for the range of images and other works gathered together for the first time ever, not only tells the story of the 200 years of special friendship as well as diplomatic relations between the two countries, but forms a wonderful foundation upon which even more extensive information on the diverse and deep peoples-to-peoples links between Nepal and the UK can be highlighted in focused ways, and utilised to promote, tourism, trade/business, and important social endeavours.

We salute the Nepal Art Council for this great exhibition, and have been delighted to play such a direct strong enabling role in its development and, now, launch.

In the UK a micro version of the exhibition (in which the UKNFS enabled the core material to be brought together through establishing relations with the main British institutes –the British Library, British Museum, V&A, Kew Gardens, Royal Botanical Gardens Edinburgh, and many more, as well as the Gurkha Museum Winchester, the Royal Collection, that contributed Nepal related images from their archives and collections) will be touring in a number of locations from the Spring of 2018.  This project has the important purpose of providing both information on the all-important and diverse peoples-to-peoples links between the two nations, and the multifaceted aspects of Nepali cultural heritage and the contribution Nepal and the UK Nepali people contribute to the UK and multicultural Britain.   We will provide more information later in the summer about this exciting initiative.